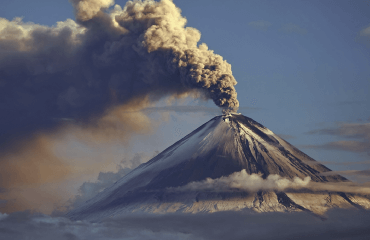 Finding out about and covering various Kanban approaches is always very interesting – we want to stay on top of innovation that you are creating in the market. So when a creator of the Arrow Kanban board, Tomas Rybing, reached out to us with his new invention, we were both eager and excited to check it out. This time, he presented the Volcano – another interesting take on the traditional Kanban board.

According to Tomas, the Volcano was born out of the bugging need to combine multiple teams and multiple projects into one space. Unfortunately, the traditional Kanban board layout was not ideal for such a situation as everything ended up being mixed up and hard to separate. To achieve a clearer and more comfortable Kanban setting, he decided to separate the board into specific sections – one dedicated for the multiple product backlog and one section for each team involved in the project. This separation allowed to plan and prioritize the work globally, while at the same keeping the process of each team away from each other.

Just like with the Arrow Kanban board, the backlog section in Volcano is based on a priority pyramid – the most important tasks sit on the top and the least important on the bottom lane. Vertically, the backlog is divided into separate columns for each product/project the teams are working on. The teams plan the work globally and look to the top lane for the following tasks to be completed. To make sure the pyramid is representative, capacity limits are put on the top two lanes, forcing the teams to really think which tasks are priorities and which can wait a little while longer.

With the exception of lacking a backlog, the boards for individual teams to measure their progress are more similar to those of a traditional Kanban. Each board is made up of the process steps for a specific team, with written definitions of done added at the bottom. To limit WIP, instead of a traditional number, the Volcano uses lanes – only one task can occupy one lane at a time, thus controlling the amount of work a team can take on. Lastly, to prepare for the unfortunate event of having to work on something unplanned, a fast lane is placed above the rest of the board.

As stated before, such approach allows to easily manage multiple teams and projects in one Kanban setting with teams working on the most important tasks across all the projects and the project tasks being prioritized altogether. However, to hold such a board in one place can become quite challenging for bigger companies with more projects and teams in place.

We wouldn’t be ourselves, if we wouldn’t try and adapt this new idea into our own software. Compared to our previous attempt with the Arrow board, we really had to step out of the box as putting all the sections into one place did not make sense. Instead, we thought it would be best to divide and conquer – using the multiple boards option in Eylean, we assigned one board for the backlog and one for each team working on the products/projects. This way, all the planning is done in one place and the teams can quickly drag & drop the highest priority tasks onto their own boards when ready. 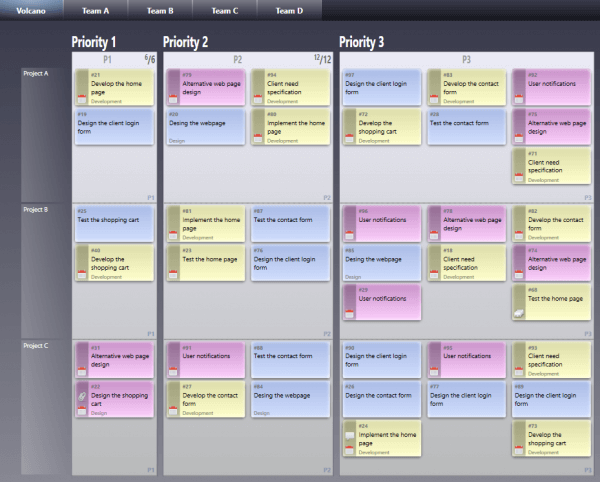 First, let us take a look at the priority backlog. Just like in the example with the Arrow Kanban board, it would be arranged not horizontally, instead of vertically. Simply because it would make it easier to overlook and move tasks that way. As seen in the picture above, columns would represent the priority of items and rows would represent different products/projects the teams are working on. Also, we thought it might be a good idea to put Priority 1 on the left side as it would be easier for teams to quickly see the top priority items and to drag them onto their boards.

The team boards would require much less adaptation when realized in Eylean. Just like in the original Volcano the priority row can be placed on top, followed by the number of rows that are equal to the teams WIP limit. The process steps can be easily added and modified as columns and the DOD’s would be seen simply by hovering over the column name with the cursor.

The Volcano is an interesting and thought out approach to ease the life of companies with multiple teams and projects at once. It will help you not only to keep track of the process, but also to do it in one place and clearly for all.