We all know about the basic kanban board, the three columns and the WIPs, however, when you have been using kanban for a while, this is usually not enough anymore. At this point most of the teams chose to innovate themselves or start looking for the innovation elsewhere. However, with such little information available, they are truly grabbing on straws. That is why, we were extremely interested in and are excited to introduce to you the arrow approach for the kanban board by Tomas Rybing.

The arrow approach is aimed at transforming one of the key elements of the practice – the kanban board. It strives to optimize and improve the board, by introducing new elements and expanding its capacities. The main differences here are the priority pyramid and limits for the number of rows as well as stories per row. Even though it may sound complicated at first, it is actually quite straightforward and not only innovates the board, but brings it a whole new shape of an arrow as seen in the picture below.

The first thing that pops out here is the changed shape and structure of the backlog. A horizontally flipped priority pyramid is introduced to the board, creating several separate priority columns. Stories are added to the lowest priority column and move up to higher priority columns as they open up. Each priority column only has a certain number of stories it can hold, so that the team can plan and prioritize more easily.

Besides the different shape, the backlog has a few more changes. First, each of the priority columns are assigned a definition of done (DoD). Which means that any time before moving a story up to a higher priority the team needs to check if it has all the necessary information according to the DoD. Such practice ensures that no stories are taking up and holding up space in the priority columns and that the process runs smoothly.

The second change deals with the highest priority column, in which the number of spots is directly linked to and the same as the number of rows your team decides to have in the board. Which brings us to another major change that the arrow approach introduces – limited number of rows.

In order to limit WIP, the arrow uses a limited number of swim lanes. This works exactly like WIP limits, allowing the team to work only on a certain number of stories at a given time. Instead of limiting the work by a number at the top of the column, the board has a limited number of rows or swim lanes and only one story can be added per one lane.

Once the story is committed to, however, it can be divided up in to as many tasks as needed, so the only limit is for the stories. When deciding how many swim lanes your team should have, evaluate the size of your stories and your team capacity. It is ideal to have the number of lanes that will keep everyone busy, but not overloaded with work.

The third change with the arrow board is the introduction of DoD at every process step. This ensures that tasks are only moved forward when they are ready. To put it more simply, at every stage of the process the team members have to evaluate the task progress before moving it on to the next stage. This helps the team avoid the delays and having to bring tasks backwards due to insufficient information or completion.

The ultimate DoD is different as well – instead of simply moving tasks off the board when done, they are kept at the end of the arrow. This gives the team a possibility to see the progress and to celebrate achievements. In fact, the approach suggests having a little team celebration every time a certain number of tasks (for example 20) are completed.

Some other changes the arrow approach suggests are:

The one drawback similar to many manual approaches is the amount of space needed to hold such a board.

Moving the arrow to Eylean

When we first thought about the move from the physical aroow board into Eylean software, we only saw the limitations – there is no way to shape our board like an arrow or to add the goal list right on the board. However, the more familiar we became with the approach, the more similarities we saw. In fact the default kanban board available in Eylean only needs a little modification to fit the arrow criteria. 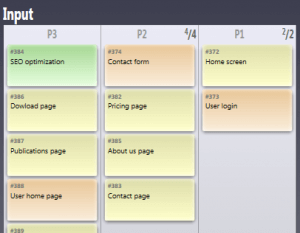 Once you create a default kanban board, the priority columns are already there, they also automatically have a limit on how many stories can be added. While there is no way to limit the number of swim lanes, by limiting the number of stories, you automatically do both.

The work in progress section continues to follow the arrow ideology. You can limit the number of features to be worked on at one time while at the same time adding as many subtasks as needed and moving them through the process steps constantly checking the DoDs.

Lastly, all of the completed tasks can be kept and even organized in the Output column, creating the arrow head affect and helping the team celebrate and count their achievements.

The Dods can be added to every single column and even though they will not be immediately seen, you will only need to hover over the column name for them to appear. The end goals can easily be stored this way as well, shown when hovering over the Done column.

Have you already tried to adapt the arrow approach or maybe you developed a separate approach of your own? Let us know in the comments.