We have recently conducted a survey for TFS (team foundation server) users gathering information about their fundamental needs, likes and dislikes. The results were quite interesting and since good things should be shared, we present them to you. 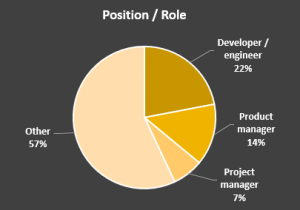 The survey respondents were comprised of various TFS users – 22% were developers and engineers, 14 % – product managers, 7% – project managers while 57% identified as other, not fitting any category. This is a dispersion of roles we see quite often within the IT industry, were it is also usual for people to have more than one role at a time, therefore not being able to identify with a single role as usual. However, since the respondents were not asked to clarify, we cannot state that this is the case exactly with our survey, simply an assumption of ours that will have to be tested at a later time.

The average team size also correlates to the specificity of the industry with the majority of respondents teams being composed of 20 people or more (50%) and 36% of teams composed of 5-10 people. It is not uncommon to see large development teams working on a project, while another trend is to keep the teams small to ensure better communication and continuous progress. Out of the respondents 64% said that they are not currently using Visual Studio Online, which can seem surprising, given the trend of moving to the cloud. This is however quite a normal number given the fact that a lot of teams still work locally and do not need the added benefits of the online solution. 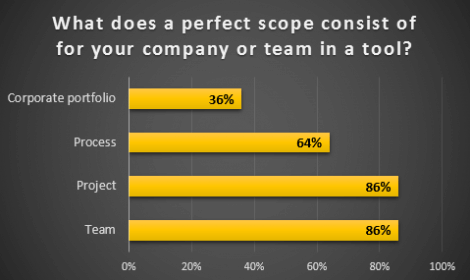 It was a particular interest for us to find out, what was the perfect scope of the tool for various teams and companies. Most of the solutions offer various scopes, however usually only one of them is really developed for a perfect experience. Therefore we thought it is essential to know which scope is of the most importance to our users. The survey revealed that 86% of the respondents said team and project scope, 64% out of the respondents said process scope and only 36% chose corporate portfolio scope. The results once again have proved of what we have suspected – the scopes that provides a more detailed day-to-day view are the most useful, while the broader executive and manager scopes are used less frequently and only by the authority figures. Therefore while it is important to offer them, the tools should be more focused for the daily use.

Since Eylean Board is based on the agile methodologies and offers scrum and kanban board integrations for TFS we also naturally wanted to know how many of the respondents use such boards that are already predefined within TFS. With only 7% of the respondents claiming they do not use these boards at all, it is safe to say that the boards are an important part of the tool. However the quality of the boards available within TFS is another question. Only 21% of the respondents that use the boards in TFS said they are happy with the solution while 57% said it was ok and 14% said it could be improved. When the same respondents were asked if they use any third party solutions for TFS, 43% said yes. It is quite clear, that while the need for scrum and kanban boards is there, most of TFS users think there is still space for improvement. And while some may be a little apprehensive about looking elsewhere for the perfect solution, most will not hesitate. Despite the continuous efforts of TFS to improve the boards, it may be that they will never be able to catch up with more light weighed and easy to use TFS plugins.

Lastly, we asked our respondents to identify what are the most important features in application lifecycle management (ALM), ranking the features from the most important to the least. Here backlog management was overwhelmingly voted in as the first priority with 64% of the responses, followed by progress/big picture overview with 28.57%. For the second most important feature, the respondents chose issue tracking with 28.57%, while reporting and team workload were mostly chosen third with 35.71% and 42.86% of the responses.

From this, it is clear that when talking about TFS ALM users, the tools should be focused on bringing the best experience in backlog management, issue tracking and the big picture overview before anything else. These features are used by the teams every single day and making sure they are as smooth and as convenient as possible should be the key priority of any tool that wants to provide additional value and successfully gain traction.

TFS while being a great and complete tool, cannot be perfect for all of the teams out there and to suffice different needs, various plugins and integrations are created every day. With the growing supply it is very important to understand the TFS users and focus on what they value the most. From the conducted survey, it is clear that the tool of today should be focused on the best day-to-day experience (team and project scope, backlog management and issue tracking) for the team and supplying additional benefits such as better scrum and kanban boards that TFS is not yet able to do.